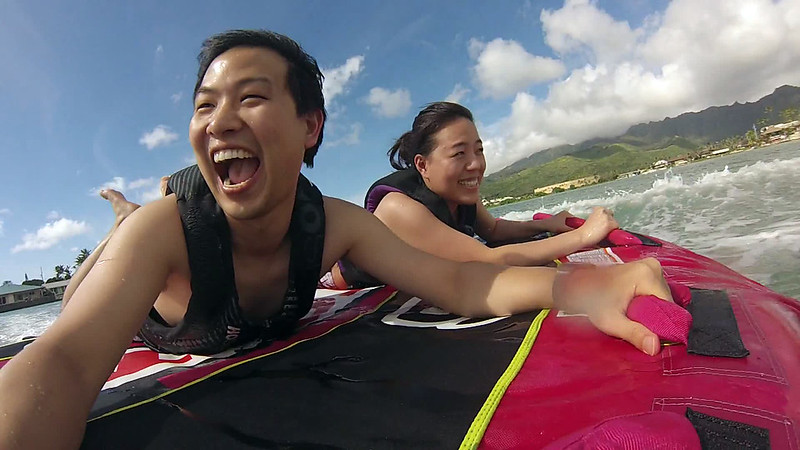 To celebrate our anniversary, we went to O’ahu, Hawaii. We had relatively busy stay, managed to squeeze in many activities. Tip: if you are going to stay at Hyatt, get the GOLD PASSPORT membership. It’s free to sign up, many perks! Make sure to take your GoPro, and Water-Proof Casings! Marukame Udon is an awesome Udon place. We ended up eating there 3 times! And please, if you get Kamaage Udon, don’t pour the sauce on your wooden box. It’s a dipping sauce. Pull the Udon out and dip. We should totally try making this at home..

Bumper Tube ride is exciting! We originally signed up for Banana Boat. Hawaii Water Sports Center recommended that for two of us, Bumper Tube was more exciting. The guy was cool enough to let me attach the GoPro on his boat while we were being tugged. and, I held one in my hand.. Here’s us first time on the Bumper Boat! Sorry Euna fell off eventually. Second time around, I went solo.. “All by my-self~!!!” I won’t embed the video, but here are the links

We also checked out Leonard’s Bakery… not sure what the hype is about..Sushi Sasabune on the other hand… WOW! I won’t say more.

Here\’s another activity you MUST do

Man, it’s a beautiful down there! I know some of you might get seasick and/or have hard time breathing out of the tank, but you must try.. if you snorked before, this is easy. And when you run into the sea turtle, it’s soooooo attempting to just ‘pet’ it. According to http://www.hale-hoola.com/Green-Sea-Turtles.htm

“Green sea turtles, as well as other sea turtles in Hawaii, are fully protected under both the federal Endangered Species Act and under Hawaii state law. These laws prohibit hunting, injuring or harassing sea turtles or holding them in captivity without first obtaining a special permit for research or educational purposes. Swimmers and divers should be aware that riding sea turtles is illegal as it puts the animals under unnecessary stress. Fines for violating these laws protecting turtles can be as high as $100,000 and may even include some time in prison.”

so, NO TOUCHY TOUCHY!

Moving on to Dole Plantation – pretty lame. their train ride is boring. They had a grill bar so we asked them for a burger with grilled pineapple. They don\’t have such in menu.. Freak, even Carl’s JR has Pineapple Burger.

“Dear Dole owner.. Why won’t you have pineapple as topping on your burger!? Grill the pineapple! Make some pineapple sauce and sell those in bottles?”

I’m sure he DOLEn’t care.. At least I learned how to pick out a good tasty pineapple! 😀 Polynesian cultural center is pretty interesting place…. it’s like miniature disneyland with polynesian theme. Here are the “things” that occur in the polynesian culture center.

Performer’s are amazing and well organized. They make it very humorous and interactive. Lots of good laughs. Food was… meh… at least have Polynesian food. don’t just give me fried rice with salty crabs legs. In the side table, we had two people, seemed like they were on first date, or blind date. Asking each other for favorite movie, favorite color, favorite names.. lame.. Other lady got mad because she asked for Coffee, and they gave her Folgers Coffee instead of Kona… Regardless, our point of this vacation was to celebrate our wedding Anniversary.  Worked out great, because we volunteered for a segment where we renew our vows by say “Aeta!”, meaning NO, (I will never leave my beloved).

Pearl Harbor..  I donno..  We aren’t really into this ‘historical’ thing. I understand that it’s a memorial, but for what I paid, it’s not much of a ‘visit’. And I don’t understand why they cannot clean up the millions of gallons of fuel that’s leaking from USS Arizona…

here’s something i found in the net…

We finished off our trip with (how can we miss this!)